I'm in and I want to... devolve funding decisions to communities. 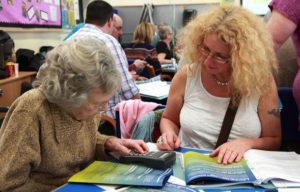 Participatory Budgeting (PB) is a process through which citizens are engaged in deciding on how public resources are spent. It was pioneered in the Brazilian city of Porto Alegre, achieving impressive social justice impacts, and has since spread to around 1,500 places around the world – including many in the UK. While implementation in the UK has been piecemeal, with many processes designed in quite a tokenistic fashion, handling very small budgets and marginal policy areas, there are some examples of good practice. Comparative research has demonstrated that genuine PB can increase the effectiveness of public spending by delivering investments that cohere with the priorities of existing populations. It also empowers citizens and civic groups to take part in the process and ultimately makes substantial contributions to distributive justice.

In 2006, Newcastle set up Udecide to allow citizens to participate in allocating a proportion of their funds. It worked with a number of neighbourhoods – Shieldfield, Wingrove and Scotswood – until 2012, inviting local people to make decisions on how to spend Cleaner, Greener, Safer budgets. It also ran a project in which children and young people in the city were allocated money from the Newcastle partnership’s neighbourhood renewal fund to spend on what mattered to them in their communities.

East Devon pioneered an innovative approach, whereby a PB process was used to decide on recreational developments linked to section 106 funds. To date more than £1,000,000 of public funds has been allocated for sports and play facilities throughout the district, including new cycle routes, improved leisure facilities and new and improved play areas.